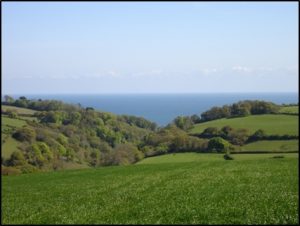 A revolution in agriculture and land management is under way. It started in America’s Mid-West and is gathering global momentum. The tentacles of this movement have even reached Stoke Fleming. Its adherents say:

SUSTAINABILITY is not enough. That just means preventing more damage to the environment and preserving what we have now.

REGENERATION must be the new goal – undoing the damage and restoring the ground beneath our feet to the condition in which it used to be.

Chris Sutton‘s land covers about a third of the 3,000 acres in Stoke Fleming parish. It runs from the park-and-ride to the Strete parish boundary. About a third is arable, the rest a mix between old, rough pasture (50%) and fresh new grass (20%), with 150 acres of woodland.

A small group of local people who are members of the Sustainable Stoke Fleming group, are standing with him on the edge of a hilltop field with views looking down to Embridge and along Blackpool Valley to the sea. Two years ago there were potatoes in the field, and when they were harvested down came the rain, washing countless tons of topsoil downstream and into the sea at Blackpool Sands.

Last year it was planted with winter wheat. This time it will be oilseed rape – but not on its own. He’s also sown buckwheat, linseed, vetch and Phacelia.  When the different elements in the mix start to grow pests like slugs and beetles will be attracted to the companion crops and the oilseed rape will be free to grow without the need for chemical treatment.

Over the winter frost will kill he companion crops, and their remains will remain as a mulch on the ground.

The aim is to completely do away with ploughing, or tilling, the land.

In future disc drills will slice fine grooves through the vegetation that has been left on the ground, and the seed will be inserted neatly into those grooves and left to grow. Different crops – winter wheat, oilseed rape, oats and winter barley – will be grown in rotation.

Because cultivated, i.e. bare ground allows carbon and nitrogen to be released into the atmosphere and the nutrients in the soil to become depleted. In due course the only way to get crops to grow is to use chemical fertilisers. The nutrient-rich soil that was once home to countless micro-organisms and beneficial fungi that feed the roots of growing vegetation are gone, and the SOIL has effectively become DIRT

The aim of the Regeneration movement is to increase the amount of carbon in the ground, year after year. The cumulative effect of not ploughing the land and allowing the micro-organisms to become prolific again and for the soil to regain its richness to greater and greater depths so that not only will carbon not be released, erosion will be reduced and fertilisers will no longer be required in anything like the quantities they currently are.

In effect, not ploughing enables a farmer to “grow” topsoil from “dirt”.

If worldwide farming adopts these measures more and more carbon will be drawn from the atmosphere, and it is just possible that farmers could save the planet’s climate.

An hour later the Stoke Fleming group is standing on another hilltop, looking down on Pleasant Valley Farm. In the foreground are cows, mostly South Devons but with the odd Hereford or Aberdeen Angus cross among them. For breeding reasons the younger cows are mated first with bulls that produce smaller calves.

This is another element in the Regeneration plan. Livestock can contribute to the cause – if managed properly. Given that more than two-thirds of the land is given over to pasture it is an important one. Next year Chris intends trialling a system first introduced by a ranching family in the USA. His fields will be divided into a system of “paddocks”, with small fields being used as a single paddock and larger ones into several, using temporary electric fences.

Cattle will be concentrated into a single paddock for 2-3 days, then moved to the others in turn, not returning to the first for at least 56 days. While in a paddock the concentration will ensure that it is well manured – naturally, and the ground will be disturbed by their hooves. Over the next two months the paddock will be free to regenerate. Grass will grow longer and roots penetrate deeper, linking with the mycorrhizal fungi that permeates the subsoil and provides nutrients to the roots.

Repeated cycles of this system are aimed at concentrating more carbon in the grass above ground and in the roots underground, deepening the fertile and nutrient-rich layer and helping develop the mycorrhizal network. It should be possible to double the number of cows grazing the pastures within five years, with carbon levels in the ground raised by five percent.

Current farming methods lead to erosion, and in many areas desertification. Some experts predict that there may be as little as 60-100 harvests left before all the topsoil has gone.

Introduction of the new approach must be made step-by-step, to ensure that each step is working and is appropriate for the particular part of the land in question. Chris simply cannot afford to commit to wholesale changes only to find out that things are not working quite as expected and he is running at a loss.

At present he has the benefit of advice from two different agronomists, his traditional one, whom he pays, and a “green” one whose services are for a time provided by  a major chemical company. The green person is advising on the areas where changes are being introduced first, while the established one keeps an eye on the traditional way of doing things.

Adoption of the new approach in the UK is not yet common, though there is considerable publicity about it and awareness is high. In the South Hams Chris is, he says, a bit like the Local Lunatic, and ahead of the field.

Some 20,000 new trees have been planted over a three year period, ranging from native species to introduced ones, both conifers and broadleaved. The most recent plantings have included native broadleaved species, as well as Douglas, Sitka spruce, eucalyptus and Monterey Pine. The next may be of English walnut.

On one eight acre parcel of land some five years ago the diseased larches that had been there were felled and removed. With advice from the former head forester for Raleigh Estates the undergrowth was left to regenerate and today there are healthy young trees of various species – ash, silver birch, sweet chestnut, hazel and sycamore among them. Into the spaces that remain eucalyptus has been introduced within the last two years. This multispecies woodland is expected to be harvested every few years and will ensure there is self sufficiency in everything from fencing materials to firewood. It is being managed with care and skill by the 84-year old former forester.

In two other 25 acre woods stand tall conifers first planted in the early 1950s that have not been thinned out in the past quarter of a century. The next thinning , probably in 2022 will hopefully provide income to enable more planting  but to also being leave only the prize major specimens to be harvested in another 25 years. This kind of planting is a multi-generation investment taking up to a century to bear its final fruit.

The margins of certain fields will continue to be ploughed in order to provide a suitable habitat for certain rare species of plants, including Broad-fruited Cornsalad, now found in fewer than 15 locations across the country, and which has adapted to survive only in places where the soil has been cultivated.

Search Ray Archuleta at https://soilhealthacademy.org  on You Tube.